We live on the Ponderosa with 87,000 birds. Most of the time there is peace and harmony. The worst bird problem being the woodpecker who is trying to peck our house down. He's been at it for a long time and we shoo him away or make a noise and he gives up---except for the large hole we found last week! Sometimes they eat from the dog food bowls or poop on the porch, but hey, we're outnumbered and you did see that Alfred Hitchcock movie didn't you? It's best not to anger the birds.
But this week a little war involving territory has broken out on the Ponderosa! 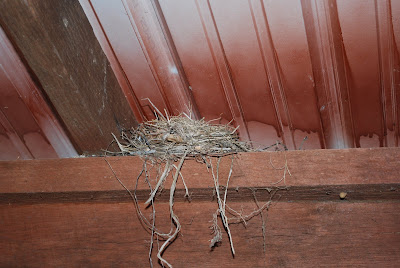 It involves this.
This week, the nesting instinct has kicked in and the birds have tried to move into our space. They want to be sheltered and their favorite places are in the eaves of our porch and shed. I can't blame them, there's nice little ledges there. Now, we tried shooing and beating the windows and putting rocks or bricks when they were trying to build, but that instinct is strong and they came right back. We tore it out, they built it right back! We needed a Plan B.
So, since we are suppose to be smarter than their little bird brains. We took ourselves to Walmart and marched right into the toy department, where they had an entire box of just what we needed for only a dollar. 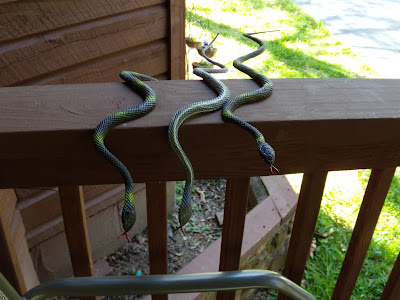 There is another instinct called fear! Our goal was to make it work for us! 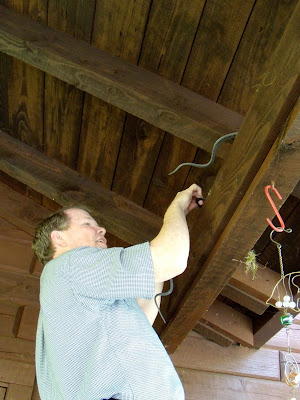 Once again there was some climbing and cleaning and strategic placement of the snakes. 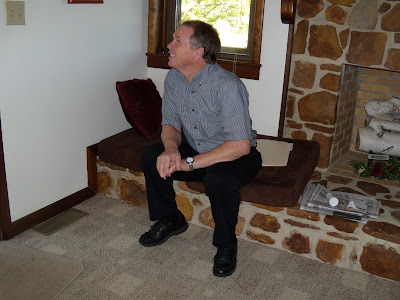 Then came the test--hide and watch to see how they react!
Bingo, they hovered in fear, landed nearby, made some bird noise and flew away. No one has seen them this afternoon! Plan B seemed to be working. 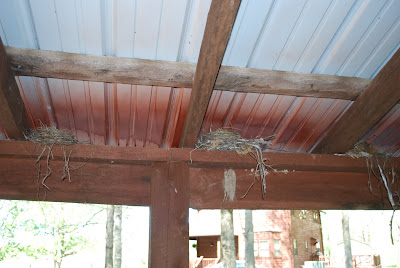 Now it was on to the shed where there were seven nests either finished or started. It was an entire bird community--a nesting ground. 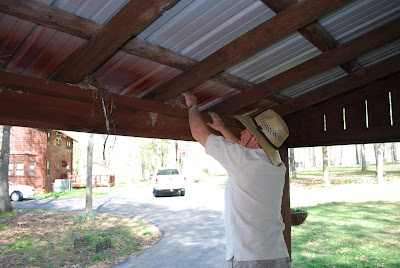 Smarter than the birds guy, cleaned up all the nests and 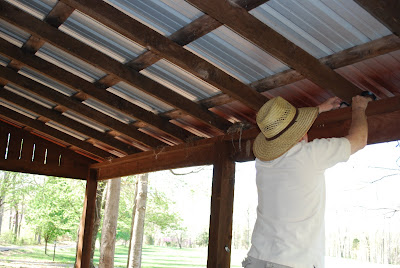 arranged another snake.
Right now we are winning with Plan B, but if you don't see us around somewhere please come check on us--it will be that brown house with all the birds sitting on it!!!!
Posted by Delilah at 6:53 PM

Nice plan B. Wonder how long before you forget they are there and scare yourself with one of the "snakes" hanging down from the porch??

I shall refer to this as Plan Brilliant! Pleas take them down if my mom comes to visit or you will need to dial 911....

That is a nice plan. Do you think that scares off squirrels? Cause we are shooting ours....jus sayin'

Kristen, our plan B for squirrels is the same as yours!