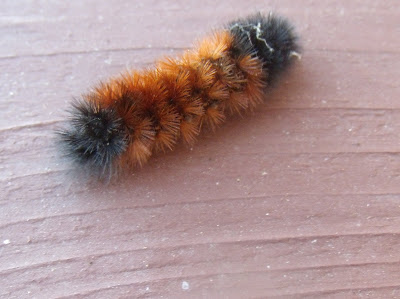 As we were putting away the porch furniture today and vacuuming some of the 80,000 spider webs around the windows, I saw this wooly worm. It looks like he/she had been in one of those webs!
I remembered that wooly worms aka woolly bears are used to make weather predictions! So I googled this idea and here's what I found:
Wooly worm forecasters say that the size of the brown band of color will tell you what kind of winter is coming. Legend says that the thinner the brownish red bands, the harsher the winter will be. If the wooly worm is mostly brownish red in the middle, winter will be mild.
So, there you go, looks like it will be a mild winter. Not good for those of us who enjoy a good snow day. We'll see if there is anything to this wooly worm forecast!
Posted by Delilah at 8:26 PM